… and the sea invaded the night  by Painting in a photograph project, 2012 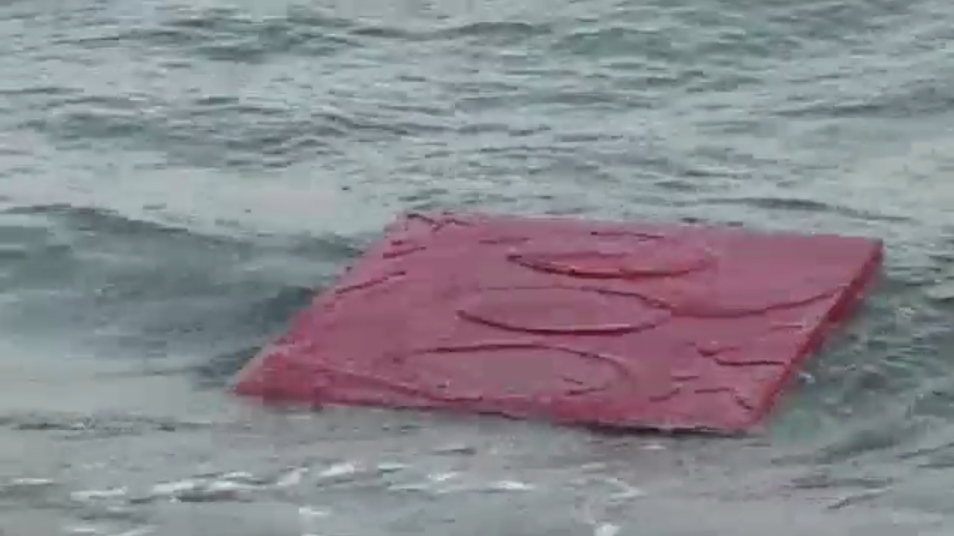 In the video … and the sea invaded the night included in the project “Painting in a photograph”, each scene is meticulously composed. Manfredi ensures the focus of the “set” is skilfully balanced so that neither painting nor photograph becomes a mere backdrop to the other. Manfredi uses the same painting repeatedly throughout each series of “scene changes”; its silent stillness becomes a permanent and inescapable presence in contrast to the “theatre” of everyday life played out before it. We open in “Red Vision”, a bleak hovel, where an elderly peasant woman looks out at the viewer as if to question what place this austere painting could have in her home or for that matter her life. When the painting appears again, it is in a morgue. Yet the work hangs beautifully here, the colour of blood, and cruelly proportionate with the white slabs; there is no person to question its presence in this place. The painting in “Infinite Message”, again uncompromisingly symmetrical, looms above the every day scenes. The only obvious connection between it and the world outside are the primary yellows reflected in the sofa in the living room, the mechanics’ overalls in the garage and the naked electric light above the chapel altar. So with each piece commences a narrative the meanings of which seem destined to be perpetually argued; the more we try to make sense of the relationship of the painting and its environment, the more unfathomable it seems to become. This seems particularly true in “Green surface”, where the viewer becomes voyeur to a private trauma shared by two girls and to which only the painting is silent witness. We are offered just a glimpse or “still” of the scene, the painting hanging above immutable and permanent, heightening our perceptions of time passing, regardless of mortal life affected by change and circumstance.

Yet, as in all great tragic dramas, when we begin to feel overwhelmed by the gravity of it all, Manfredi allows the viewer some welcome comic relief, and this he manages with a flare of artistic genius. None of the “shock” antics of contemporary art in the past decade have so far made as memorable an impression on me as the concluding piece to this series. Indecorously dropping his work to carpet level, Manfredi makes it play mirror to a woman’s legs.

As the scenes of the “play” continue in each photograph, the tension mounts again as the painting assumes an almost iconographic status beyond human contact. It is only on one occasion that someone actually acknowledges its presence, and that is by a child. “Travel into Memory” seems to suggest that, as we grow older, our accumulative experience and knowledge, eclipses our ability to “see” beyond reality. In part two, the painting lies partly obscured in a shadowy interior, images of the Madonna and child are visible among a vast clutter of discarded toys. Could this image symbolise our adulthood, devoid of the unquestioning beliefs and imagination that is so much a part of a child’s existence?

We follow on into the bedroom and into the final series. The painting unsettles the mood here by focusing our attention on the raw sexuality that permeates the scene and an accompanying sense of ‘loss of innocence’. Again the viewer turns voyeur, having arrived too late and missed the action, all we witness is a woman on the point of leaving; the painting, present throughout, reveals nothing. We must use our imagination to fill the void and complete the story for ourselves, as the painting above the bed ensures we sense something beyond the human experience depicted.

It is left to ask whether Manfredi succeeds in his objective in closing the distance between his art and real life? I feel the argument crystallises in the final piece of “Absolute silence”. The ideals of abstract minimalism become like jetsam floating on the incoming tide going nowhere; or could it now in its new context, like a raft cast out to sea, become a symbol of embarkation and voyage to different places or to numerous and various paths of discovery? There is one thing though of which we can be certain. By radically reinventing his art, Manfredi achieves a unique symbiosis between the prosaic and the sublime. One cannot exist without the other. To remove the painting from the scene, all sense of enigma evaporates, seeing the painting alone on the gallery wall and it becomes remote once more, speaking only to a cultural elite. This work now speaks not just more about the artist’s own life, but our life, in all its ordinary and extraordinary manifestations. Ultimately, Manfredi humanises his work, but maybe in a more ways than he intended, by ensuring that when we move on, it remains with us.
by Lucy Watson
Museum Collection Administrator  at Central Saint Martins College of Art, London

The wind recalls the past
Harlech Biennale, Wales, UK 2012 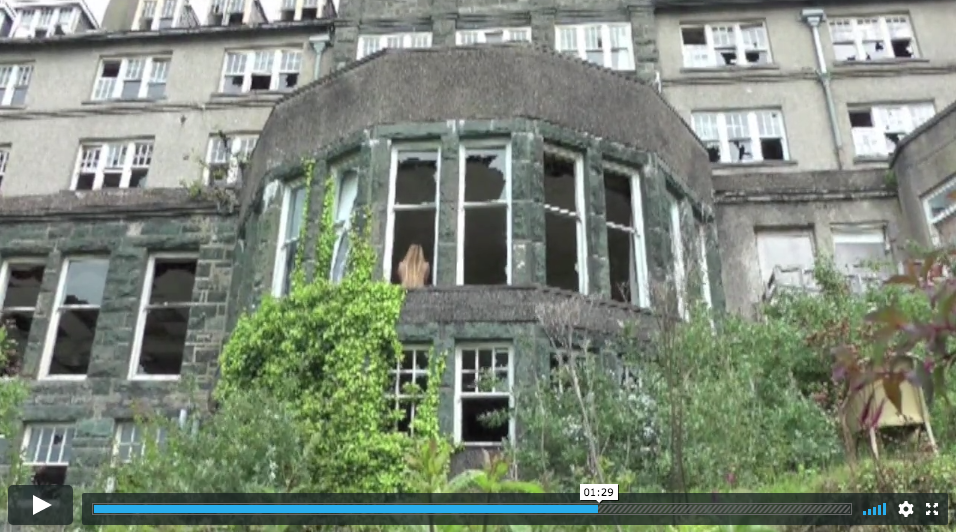 “The wind recalls the past” by Antonio Manfredi and Helga Gasser
A window. We see long, flowing hair, a female back disappearing into the darkness of the room. We hear sounds like music of the spheres, reminiscent of church bells and wind chimes.
The scene changes. In the soft light of a cloudy day, bare feet feel their way over changing surfaces, soft ground, hard stone, they dig laboriously through the sand and touch the water of a beach, follow the path of a train along rail roads, a rocky road covered with broken slates, finally reaching a dark yellow cloth with dark red pomegranate motifs that covers the ground. The cloth’s soft and warm fabric can be felt intensively in stark contrast to the previous cold and hard surfaces. As the path becomes more arduous, it takes us away from the memory of the soft, naked earth to man-made comfort. The camera acts as a persecutor, sneaking after the vague memory.
Change of scene. An old, dilapidated villa wreathed with ivy appears, probably a long abandoned, Welsh hotel. In front of this formerly magnificent building we see the back of a female nude sitting on a wicker chair, her hair waving in the wind. A “Meeting Place” that has long lost its purpose.
The artists take it into possession with their work. The figure of the woman allows us a trip into the past of this place. Shattered windows and torn curtains blowing in the wind, again and again the woman at the window, the dissolving entrance hall, pieces of cloth. The woman turns her head; the box of memorabilia, the same box that travelled from Naples to Salzburg, appears, a hand opens it. We see the lining with the photographic silhouette of a tree. The box holds the memory of its origins.
Natalie Cortiel, June 2012

May be. They could live here. International warrant, 2011_Work in regress.
The installation title at 54° Venice Biennale poses a provocative possibility of the penetration of the protagonists of organised crime into apparently certain places. a series of vertical posters portraying men with usual looks welcome the visitor, who can walk among them, in fact. the crowd is made up of 12 fugitives, Mafia Camorra and ‘Ndrangheta men, international warrants who live on the bodies of anonymous passers-by thanks to a photography editing. the figures represent people everybody can meet while walking in the streets, here the image of the warning by Antonio Manfredi: They could live here. 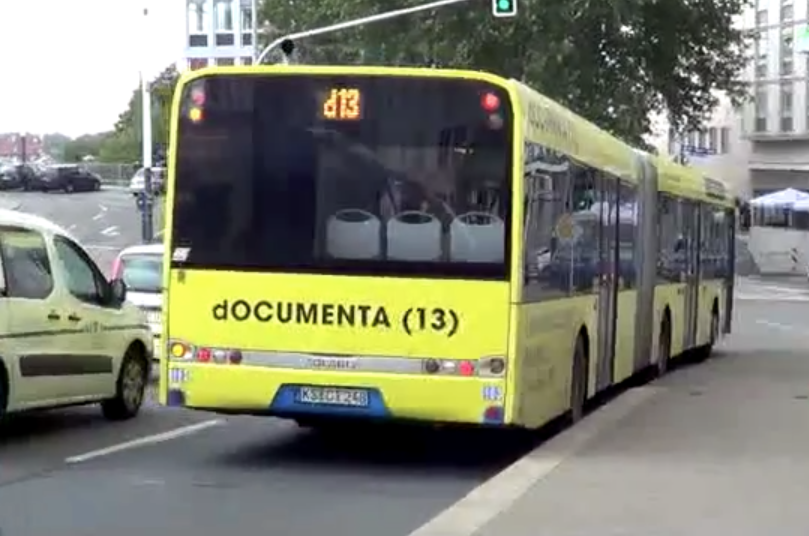 The performance site, a small house in a remote industrial area, is located behind Kassel Hauptbahnhof/main station, which is one of the dOCUMENTA(13) sites this year 2012. The performance will start at 12 pm sharp and will last exactly 60 minutes. It will feature Miriam Wuttke as solo performer in an installation inside as well as outside the house and will merge pieces of her series “HOME-LAND-LUXURY” with the concept developed for dOCUMENTA(13). This will include a 60 minute auto-video of Antonio Manfredi, Italian artist and contemporary art museum director, who initiated CAM Art War and who was involved closely in the development of the piece. The soundwork is created by Berlin based sound artist Veronica Mota who will compose her 60 minute piece according to performative movement and gesture and the images of the video of Antonio Manfredi. Visitors can enter the house as well as watch the performance from the outside and are very much welcome to become the recipients of a token which will be given to them by the end of the 60 minutes.

This is my home and I built it. I am a daughter of Europe, a daughter of YOU as the embassador of the gereration handing over our common history and values to me. I am here to receive and to act according to these values. And I am YOUR mother, a giver, a care taker, a fighter. I prepare our common grounds. Using the ashes as a fertilizer for new things to grow, to come and to outlast. I spread the ashes to mingle with the wind, the earth, the air, the water. I use my freedom to carry the weight I learn to cast off, piece by piece, step by step, day by day. This is a silent correspondence. Miriam Wuttke, June 2012